A Guide To: Party Walls

What is a party wall?

If you live in a semi-detached or terrace house you share a wall (or walls) with your neighbour – that wall is known as a party wall.

Party walls usually separate buildings belonging to different owners but could include garden walls built astride a boundary – known as party fence walls.

Where a wall separates two different size buildings often only the part that is used by both properties is a party wall, the rest belongs to the person or persons on whose land it stands.

Since the Party Wall etc Act 1996 came into force, homeowners in England and Wales have had a procedure to follow when building work involves a party wall or party fence wall, some excavations close to neighbouring buildings, and new walls at boundaries.

The Act permits owners to carry out certain specific works, including work to the full thickness of a party wall, whilst at the same time protecting the interests of anyone else who

The Act is designed to avoid or minimise disputes by making sure property owners notify their neighbours in advance of certain proposed works. The Act requires that where the adjoining owner does not ‘agree’ in writing to the works a surveyor or surveyors will determine the time and way in which those works are carried out. 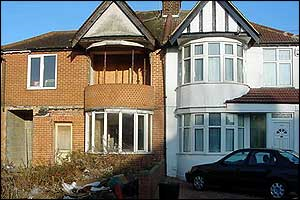 What is covered by the Act?

There are some things that you can only do to a party wall after notifying your neighbour and either with the written agreement of the neighbour or with a Party Wall Award prepared by a surveyor/s.

You must also notify your neighbour if you propose to build a new wall on the line of junction (boundary) between two properties.

What is not covered by the Act?

The Act relates only to certain specific types of work and is permissive in nature. It is not just another way to object to or try to prevent your neighbour’s works nor is it intended to be applied to everyday minor jobs that do not affect the structural integrity or loading of a party wall, such as:

The party proposing to carry out any works under these categories is termed “the Building Owner” who is required to give prior notice of his proposals to an adjoining leasehold and/or freehold property owner who is termed “the Adjoining Owner”.  Having been served with a notice, one of the following procedures is adopted:

In all normal circumstances, the fees of all/any appointed Surveyors are paid by the Building Owner, although this could be changed by an Award from the Third Surveyor when settling any dispute.

In any proposal that is beyond straightforward building construction (dependent upon the nature of the works), the appointed Surveyors may need to make a secondary appointment for any other specialist advice required, such as that from a Structural Engineer, whose justifiable fees are also paid by the Building Owner.

In minor matters, such as very small domestic building work, it is quite realistic to simply agree the proposals. In larger projects, or where the Adjoining Owner has any concerns, the matter proceeds to an Award but, in any situation, the Building Owner is required to indemnify the Adjoining Owner against the possibility of damage that might arise either accidentally or by negligence.  Such damage is determined by reviewing a condition survey of the original condition which is normally agreed by the Surveyors at the onset.

The purpose of an Award is to document the details of the Building Owner’s proposals that have a direct or consequential affect upon the Adjoining Owner’s land or property and to record the conditions and requirements under which the Building Owner must execute those works.

The documentation includes drawings and other working details, together with method statements agreeing the procedure.

Arrange a survey by contacting us at:

or by giving us a call

We're open at the following times:

Please telephone at your convenience.